In this area, multilayer PCBs in Polyimide, Polyimide-Thermount and ceramic for space applications are assembled by welding processes. 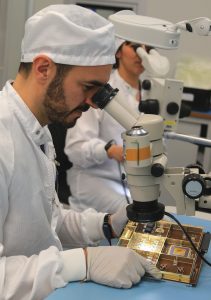 Each workbench is equipped with a local air extraction system for the expulsion of the volatile parts generated during the welding process. The working area temperature
is maintained and monitored continuously at 22 ° C ± 3 ° C. Room relative humidity is maintained and monitored continuously at 55% ± 15%. Each workstation has a brightness intensity of 1080 lux. In order to prevent the accumulation of electrostatic charges and to avoid potential differences, personnel, equipment and all devices handled are kept at the same earth potential.

Within this area there is also an electrical testing department of the DcDc Converter. A team of testers coordinated by the supervision of a Senior Advisor and an Electronic Engineer works actively on a line of electrical testing and debugging for Dc-Dc Coverter. This activity, carried out entirely in house, is applied through PCB assembly and realization of transformer and inductor components. The skills acquired in the field of space in twenty years of experience on DcDc Converter are characterized by a first phase of debugging of the EM models, on which all the electrical test campaigns listed in the testing specifications are carried out, and for the EMC (Electromagnetic Compatibility) campaigns and environmental tests in controlled temperature (Thermal Test).

All protective clothing consists of static dissipative material, all utensils and consumables are conductive or static dissipative. In this area there are 16 workbenches for assembly operations, 5 benches for the activities of quality control on the product and 4 benches for the electrical test activities. All the work benches used for assembly are equipped with a microscope with a magnification range between 10 x and 50 x, a METCAL SP200- type welding station at a controlled temperature and a preheating plate to facilitate welding operations. All operators involved in the
welding process are certified by the European Space Agency. In this flow chart, the process standard used for the construction of an assembled PCB is shown: 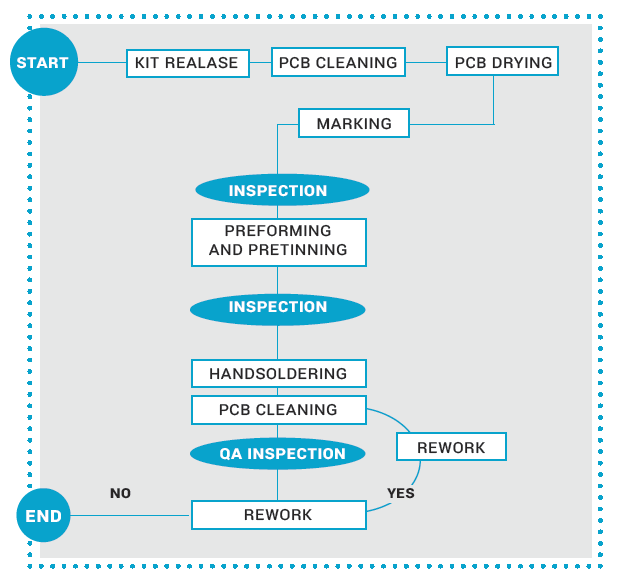